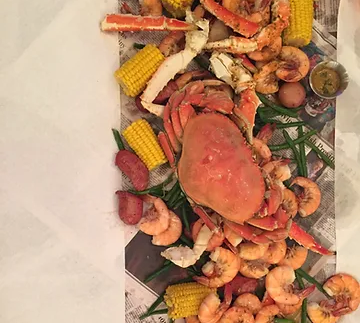 Oh well…Time to buy some fresh from the Gulf seafood!

Enjoying the fresh local seafood is a staple of any beach vacation whether at your beach house digs or in a restaurant. With the long sunny days and beauty of the sunsets, it’s likely you and your crowd will end up wanting to have a few relaxing evenings that don’t include the hassles of restaurant dining. Here’s some helpful tips to plan those memorable seafood themed dinners at the beach house.

Who wouldn’t want to cook up a good fresh from the Gulf seafood feast in this Livin' The Dream kitchen?

Or... If you'd like to enjoy some great prepared seafood at the house, but don't want to bother with shopping, cooking or cleaning...call Squidley's Seafood (850-775-1129) to order by 5:30 p.m. Thursday - Sunday. You can pick up a delicious custom sized order of Crab Fest, seafood boil, etc. as they are conveniently located at 22416 Panama City Beach Parkway.

2nd... Find out which seafood is in season during the time of your vacation.

3rd... Make selections according to your palate and choice of preparation.

Apalachicola oysters: straight from Apalachicola Bay to your plate. A meaty, high quality source of protein; served raw, steamed, roasted or "fancy" (as in Oysters Rockefeller).

Blue crab: found along Florida's Gulf and Atlantic coasts; served in both its hard and (more commonly) soft-shell state

Catch of the Day: you can't go wrong with this fish, as it was probably still flopping around the kitchen when you walked in the door for dinner. Check the blackboard for specials, but the fresh catch is most often snapper, grouper or dolphin (see individual descriptions for details on each).

Catfish: fried catfish is the ultimate Southern specialty; Channel catfish can be found most anywhere in the state and make for great eating.

Conch: pronounced "konk." These chewy mollusks are served tenderized with lime juice, raw and chopped in salad. Also chopped, breaded and fried as conch fritters and in conch chowder (usually red and spicy).

Cooter: a pan-fried favorite, the meat from a soft-shelled turtle (more like "lakefood" or "riverfood" than "seafood," but we wanted you to be prepared should you come across it on a menu).

Dolphin: (the fish, not Flipper) also called mahi mahi; a firm, white-fleshed fish that is delicious grilled, blackened or Cajun-style.

Eel: darker meat with moderate flavor and texture; most often seen served raw in Japanese restaurants, but can also be baked, stewed or grilled.

Florida lobster: known as the spiny lobster, it has no claws like the Maine variety. The tails are broiled and served with melted butter. Delicious!

Flounder: a fine textured and delicate fish; can be baked, sautéed, broiled or steamed.

Grouper: one of the mildest fishes available; served blackened, broiled or chargrilled as an entrée, but a fried grouper sandwich is hard to beat.

Hogfish snapper: this rarity (also called hog snapper) is considered by many seafood aficionados to be the best tasting of all reef fish. Its meat is virgin white with a delicious, subtly sweet flavor. You're more likely to see it on Keys' menus than elsewhere in Florida.

Ipswich clams: imported from Ipswich, MA (who'd have thought?), these clams found on many Florida menus are smaller and sweeter than most of their cousins. They are served fried, baked or steamed.

Jambalaya: (o.k., so it's not a fish, but it is a fishy dish) although this southern favorite is most often associated with the Creole cuisine of Louisiana, Floridians have embraced this dish as one of their own. Using fresh (often local) seafood and a variety of inventive herbs and spices, Florida has added a unique twist to this classic Cajun creation.

Key West pinks: large pink shrimp that once accounted for half of Key West's fishing business. The boom is over, but shrimping boats still trawl at night November - July and Key West restaurants offer them year 'round.

Littleneck clams: hatcheries are located in Cedar Key and Boca Grande. They are delicious served raw on the half-shell, steamed, in soups and sautéed with pasta.

Maine lobster: Fine to order in New England anymore, but when in the Sunshine State, blend in with the locals and order Florida lobster tails.

Mullet: a delicacy in Florida, this fish is usually served smoked. (Another Florida "delicacy" - or disaster, however you may view it - is the mullet haircut. This unique hairstyle - and we use the word "style" lightly - is short on top and long on the bottom. Usually found in more "countrified" areas of the state.)

Mussels: usually served steamed and by the dozen.

Negaprion brevirostris: If you haven't brushed up on your Latin lately, you can order this delicacy by its common name - lemon shark. It's great grilled, but you can also find it seared or broiled.

Squid: (admittedly, we might be reaching a bit with this one) although most often seen as the Italian dish "calamari" (available on most seafood menus), squid can also be baked, broiled, sautéed or served with pasta and salads.

Rock shrimp: small shrimp from Gulf waters; prepared like regular pink shrimp but in less time. The taste is said to resemble that of lobster.

Scallops: sweet, succulent meat that is actually the muscle between two shells, scallops are served lightly breaded and sauteed, grilled, broiled, in soups or served on salads. In Florida, scallops are found in Gulf waters and along the east coast; you can even catch your own scallops during summer months in the small fishing village of Steinhatchee and its environs.

Sea bass: a lean-fleshed fish appropriate for almost any cooking method. The white sea bass most often seen on menus is actually a member of the drum family.

Stone crab claws: served hot or cold with butter and lemon or with mustard sauce. These are a seasonal delicacy, offered from October to May.

Trout: Spotted seatrout is a light meat fish with moderate flavor and firm texture; it is most often found fried, but can also be baked, steamed, grilled and broiled.

Uncooked fish: better known as sushi or sashimi, this Japanese staple is a growing trend in Florida seafood. Served alone (sashimi) as well as on a bed of rice (sushi), long lists of raw fish are found on a variety of menus. You'll find tuna, salmon, whitefish, octopus and many more.

Whitefish: a mild-flavored fish most often baked, broiled or grilled.

Xiphias gladias:  (a.k.a. swordfish) this feisty fish is dangerous in the water but delicious on your plate. The fish can be grilled, broiled or baked. It's often served with a fruit salsa or chutney, which add a flavorful accompaniment to its mild taste.

Yellowfin tuna: a firm, flavorful semi-dark meat fish that can be grilled, broiled or blackened. Tuna is also served up rare on many Japanese menus and is a favorite with most sushi connoisseurs.

Zander: a succulent fish most often steamed or broiled (that, unfortunately, you're not likely to find on Florida menus, but we needed a "Z" or else we'd have to call this the "Florida Seafood; A to Y")

You’ll find all the kitchen tools and supplies you need to prepare great meals at “Livin’ The Dream.”

For inspiration... here's some of our favorites:

Seafood Paella: Livin' The Dream provides a Natural Gas Weber Grill and a Paella Pan... so get cooking.

You're logged in to OwnerRez. Manage this site:
Edit Page Edit Site Logout